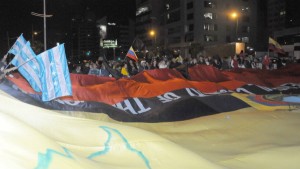 On Thursday, opponents of the government of Ecuadorian President Rafael Correa concentrated in the Centenario Park in Guayaquil and Shyris Avenue in Quito to protest after a pause before the visit of Pope Francis.

However, one of the protests was against the mayor of Quito, Mauricio Rodas, from 17:00 at the Plaza Grande, in the historic center of the city, in front of the City Hall. Dozens of people gathered at the site with posters that read phrases like “no to coup leader Rodas.” In addition, they shouted slogans like “Out, Rodas, out.”

Riot police (black suit) arrived to control the protest before 18:00. They tried to evict the demonstrators, but only managed to divide them into two groups: one at the Espejo street and the other remained in Plaza Grande.

At the De los Shyris Avenue, for a period of 30 minutes, demonstrators made a sit-in outside the headquarters Alianza PAIS and shouted slogans like “out, Correa, out.” They carried Ecuadorian and black flags, in addition to whistles and horns. A police officers formed a line in the main door of the premises.

In Guayaquil, demonstrators of the Centenario Park carried banners reading “We want freedom, we want democracy;” and shouted in unison: “Out, Correa, out.”