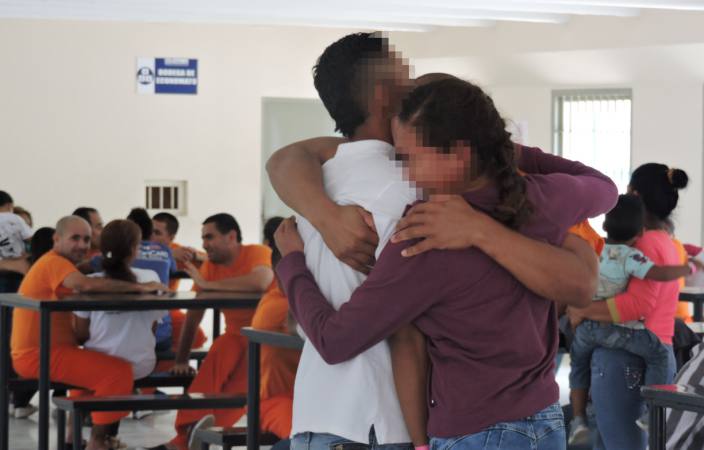 Gregorio has the face of Jesus tattooed on his right arm. On the chest he bears the names of his wife and children, whom he had not seen for 4 years and 3 months when he was captured near Galápagos waters

Inside the El Rodeo Social Rehabilitation Center – where the 33 prisoners who were detained in the US were placed – he hugged his mother, brothers, nephews, wife and children yesterday after telling them that he will change after being involved in an activity of narcotics traffic.

For that crime he was sentenced by a US court to pay 9 years, of which he has already served half.

“You miss your country far away. you are with people who you do not know, from other sides, at the end you learn from mistakes … I miss everything from Manta, the air, everything, there (United States), it’s different, it’s cold, it’s always cold, the food is canned, “said this young man, who was observed by his relatives with a lighter skin color.

In the center of the visiting area, Seiber O. hugged his two children in tears. His sentence is 14 years, of which in the United States he turned 7 years and 3 months. It is the time he did not see his children, whom he left very young. He said he will wait for the time to meet again with them.

“The message that I give my fellow countrymen: that you can a get a bread by any means but the ambition for more money can’t take you places you will not bear to support, I’ve seen people hang themselves and I do not want that for any of my friends” he said.

Juan also contacted his family after almost 3 years of being detained in an American prison. In his return he will donate part of his bone marrow to his sister who urgently requires it. He expects the authorities to help him.

“Obviously, no one is innocent not to know what you are doing,” he answered when asked if he knew what he was doing at the time of transporting the alkaloid.

Alejandra Andrade, Zonal 4 coordinator of the Ministry of Justice, indicated that the conditions of the inmates are optimal, only one of them suffers from diabetes, a chronic disease that will be followed up, since he already came with medications from the United States.

For the moment they will be in Hall C, the same one where the 20 inmates of Chinese origin are, captured in the Galápagos reserve with fishing. “The Minister of Justice has to approve the sentence that they have from the United States and little by little go knowing what benefit they will be welcomed to (the detainees),” Andrade explained. (I)

What did education authorities do in multiple child abuse cases?