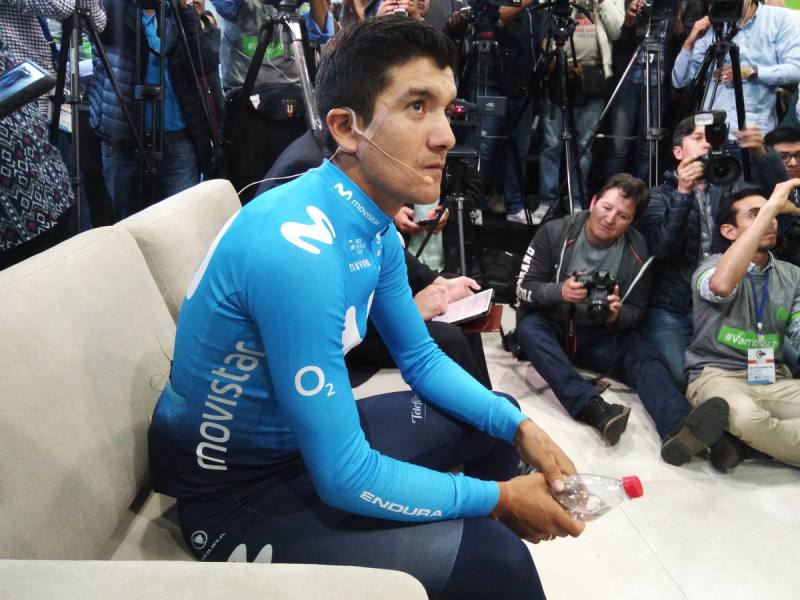 With a broad smile, despite the fatigue of the trip, the cyclist Richard Carapaz appeared Tuesday night before his people. The carchense, who shone in the 101 edition of the Giro d’Italia, where he ranked fourth in the general classification, came to the country to take a break, but soon to meet a tight schedule.

In a conversation, Carapaz recalled his beginnings in cycling, spoke of the lack of support for his sport, something he hopes will change with his performance. “I lived what Jefferson Pérez did (gold medal in the 1996 Olympic Games). Like him, I did not have the support at the time, but we see that effort and perseverance pay off and history can be made for the country. That, the lack of support, does not pass to the new generations, “he said.

His face does not erase the smile when he talks about his first experience in the Giro, which he defines as a ‘brutal’ competition, does not hide his satisfaction with the dream fulfilled. “It was a very tough test, with my team (Movistar) I had the fortune of being able to prepare it very well. There was a lot of confidence and that’s why the results were obtained, “he added.

In his memory will be recorded May 12, when he won the eighth stage and crossed the finish line in Montevergine di Mercogliano beating his chest. That gesture, he explained, is representative of his personality. “It means the strength that I carry in my heart, the attitude and a dominant power through the heart,” said Carapaz.

With the fact in Italy, Carapaz hopes to have more space in the Movistar Team for the remainder of the season; his contract applies, for now, until 2019. “I am the new blood of the team, now there are more reasons for them to trust me,” said the cyclist, who is getting ready to wear the tricolor shirt.

“I’m going to run a couple of classics, about two laps before the World Road,” he said. Carapaz meets today with his family, in his land, but before going to his house, in Julio Andrade (Carchi), he will carry out several activities. At 08:30, the cyclist starts a caravan that leaves from the rostrum of the Shyris to the Bicentennial Park. Later it will be in Ibarra and then it will go to Tulcán.

“I traveled like a stranger who had many illusions about the Giro d’Italia, but after three weeks we had a country that was revolutionized by cycling, which is very motivating,” he said

Finally, the attendees sang Happy Birthday for this great cyclist who will not participate in the Tour de France because now he is in search of the Cycling World Championship. (D)

I will prepare myself to represent the country in the Road World Championship (next September, in Austria). I hope to have the support of the authorities, because good results there would be encouraging for our sport Richard Carapaz, Ecuadorian cyclist.