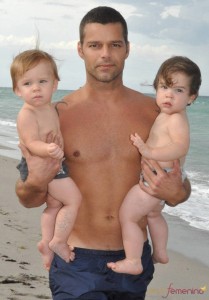 According to a People magazine article, Puerto Rican Ricky Martin is considering adopting a baby, which means his children, 2-year-old twins Mateo and Valentin (who were conceived with a surrogate) would have another brother or sister.

“Although I started with the surrogacy (surrogate mother), adoption is probably my next step, ” said the former member of Menudo after his performance in the special A Christmas home on CBS, which seeks to raise public awareness on adoption.

“I’m here as a parent. 20,000 children have been wonderfully affected by this program. Adoption is beautiful. Give it a chance,” the singer said during the program.

Ricky Martin recently released a book with his memoirs: “Yo”(Me), it is dedicated to his twin sons, and it talks about the subrogation method.