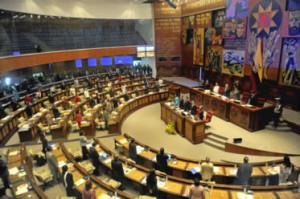 In the Constitution approved in Montecristi, the right to resistance is found in Section 98 under Title IV, under “Participation and organization of power.”

No one questioned that this right is included in the new Constitution. Rather, they spoke favorably about the initiative.

The second debate was held on June 16 of the next year. Of the 17 Assembly members who took part in the plenary, only Rafael Estévez and Martha Roldós (of the RED party) commented in this regard, as recorded in Act 62A.

The first reiterated his reflections of the first debate. The other called to include derogating provisions of other standards opposed with the proposal, like the previous Criminal Code.

On Saturday, September 5, Correa said that including the right to resistance was a “romanticism” of the first president of the Constituent Assembly, Alberto Acosta.

On Saturday, the president reiterated: “We knew that in the name of that right abuses were goint to be committed.”