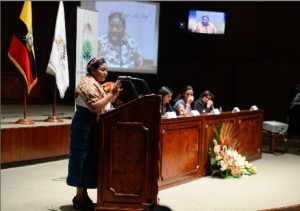 The 1992 Nobel Peace Prize winner, Rigoberta Menchú, highlighted the progress achieved for indigenous peoples in the region’s Governments as Evo Morales in Bolivia, and also on the Ecuadorian Constitution, with the recognition as a plurinational State, during the Conference: ‘A Programmatic Agenda for Indigenous Peoples in the Twenty-first Century’, held today in the living room ‘José María Lequerica’ of the Legislative Palace of the National Assembly.

In the same way, announced that it is organised a Summit of Indigenous Peoples, to be held in April of the 2016 in Ecuador. “It will allow us to renew our activities and regulations that benefit indigenous peoples, and above all to establish a new relationship between the peoples and States”.
Referred to the visit to the canton of Lago Agrio, province of Sucumbios, to ascertain the damage of the transnational Chevron-Texaco in Ecuador’s Amazon region. “This is no longer an indigenous affair, but of all persons living in the sector, and is a matter of the planet”, she said.