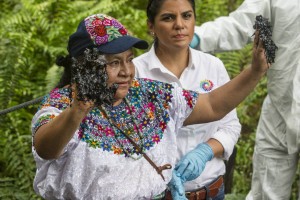 Rigoberta Menchú, indigenous leader and Nobel Peace Prize (1992), was yesterday in Ecuador and visited the well ,Aguarico 4, province of Sucumbios, to witness the contamination by the oil company Texaco, then acquired by Chveron.

Menchú put her hands in the crude oil spilled on the ground during the operations of the company in the country between 1964 and 1990. In this way, she joins the campaign “Hand dirty Chevron” which was attended by recognized stars of cinema and music.
The guatemalan activist will be in the country until Friday and will participate in a meeting with  indigenous from Amazonia next to President Rafael Correa.

Without order from U.S. Prosecution of Ecuador will not investigate to Luis Chiriboga