Rigoberta Menchú will give a lecture in Ecuador in 2016 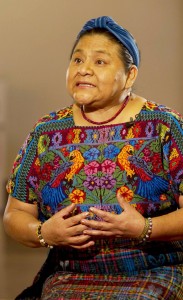 Correa did not specify which month would be the appointment, but said it will be held in the country. He also reported that the decision was taken with Menchú with the objective to “revive the discourse of our ancestral peoples” and “reframe the discourse of some leaders”.

The President also reiterated his criticism of unions as Pachakutik and the Confederation of Indigenous Nationalities (CONAIE for its Spanish acronym) who he said, repeat the discourse of the MPD.

Carlos Perez, President of ECUARUNARI (part of the CONAIE), said Correa’s statements show “the hardcore colonialism practiced by the present regime”. He also downplayed the conference and stated that “there will not be the essence of indigenism”.

61 media of Ecuador were rated by the national Cordicom

On Monday amendments begin to be discussed