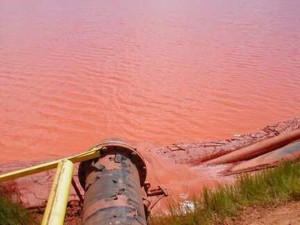 The toxic mud spilled in Hungary has entered in the stream of the Danube River; it is expected to arrive on Saturday to the Rumanian province of Mehedinti, whose capital takes water from this source for human use.

Director of the Mehedinti Prefecture, Albei Florin, said today that the “red mud” would arrive to the town of Brazias on Saturday; he hopes that the sludge dissolves earlier.

Meanwhile authorities have foreseen the possibility to cut the water supply to Dobreta Turnu Severin, a city with a population of 100.000, capital of this province that drinks from the Danube. Albei also supports this measure if the toxic mud arrives to the city.

The responsible of the leaking said that the biggest harm would be for the fishes, and the environment of the zone. The rupture of a boat from a company that manufactures aluminum caused the “red mud,” on Monday, an extremely substance caustic with heavy metals components.

About 40 square kilometers and several rivers in the west of Hungary are affected by the toxic mud, which caused four deaths, over 120 injured and hundreds of destroyed homes.