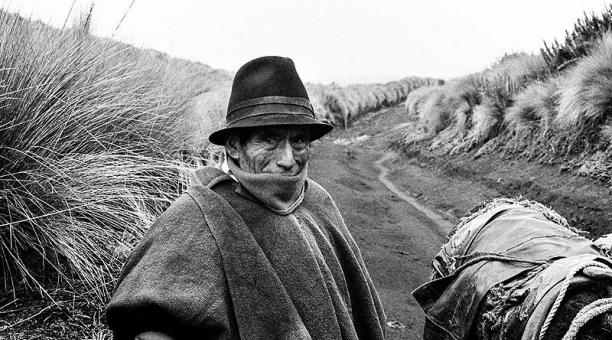 A photographic exhibition about Baltazar Ushca, the last icemaker of the Chimborazo, will be held on June 16 in Rome, Italy.

The images are finalists in a contest of the Tevere Art Gallery of that city. The images were captured by the Italian Manuel Succi. All were made with a Leica M6 analog camera. “The series of photographs was taken in the center of the Ecuadorian Andes in February 2018, when I visited the beautiful province of Chimborazo. At that time I met Baltazar, a 74-year-old man with a huge chest and a height of just 1.40 m, who always has a big smile on his sweet face marked by time, “said Succi to the Italian cultural magazine L ‘Ameltico.

Ushca is known to be the last icemaker of the Chimborazo, a work that formerly made about 40 people. Every day he climbs the volcano and collects ice from the glacier to sell it at the market.

“I had the privilege of climbing the mountain with him and portraying the story of a humble and wonderful human being who still believes in a past tradition. It is a remarkable and exceptional work, since he has been doing it since he was 15 years old in an extremely hostile environment.

Despite his ailments today, he is an old man with great physical strength and an incredible spirit, who has an infinite and childish desire to climb the mountain as if it were the first time, “he recalls.

Before dedicating himself to photography, Succi worked in audiovisual production. His work reached important international platforms such as the Edinburgh Short Film Festival and the Human Rights Film Festival of Barcelona.

Since 2014 he decided to dedicate himself completely to this branch. “The immediacy of the photography allowed him to live the stories more directly, the people and the different realities that created his images”, says his autobiography.

From then on he became fascinated by analog photography and learned in depth the traditional techniques of black and white printing. During 2017 and 2018 he traveled through South America, documenting the stories of the indigenous population of the Peruvian Andes.

He also captured the everyday life of the Achuar community in the Ecuadorian Amazon. The series in its entirety, like the rest of the photographs of its journey across the continent, was made with a similar camera. The winner of the contest will be able to exhibit their images at the Festival de Arles in France, one of the most prestigious in the world. (I)