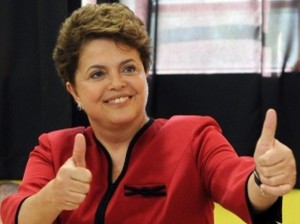 25 days from the beginning of the presidential elections in Brazil, President Dilma Rousseff (PT) , candidate for reelection, has recovered some encouragement after the last poll released on Wednesday, September 10 by the Datafolha institute.

The President has risen two percentage points, reaching the 43% of voting intentions, while socialist Marina Silva (PSB) has dropped a point and stands at 47%.

If elections were held today, the two candidates would go to the second round, leaving out of the fight for the presidency Aécio Neves, the PSDB candidate, the second placed before the entry of Silva in the dispute. According to the new poll, Rousseff would have a 36% of the vote in the first round, and Silva, 33%. That is to say they would be technically tied, while Neves would reach a 15% of the vote.