Routes of Pope Francis in Quito and Guayaquil 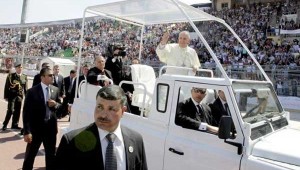 The official agenda of Pope Francis will take place predominantly in Quito, where he will stay from 5 to 8 July. The Pontiff will be received in the Apostolic Nunciature, located in the avenues 6 de Diciembre and Orellana, in northern Quito.

In Guayaquil, Francis will be eight hours in the city. He will go by a car to the Sanctuary of the Lord of Divine Mercy. There, he will remain about 20 minutes. There will be 2,000 participants, mostly children and elderly people from popular areas such as Monte Sinai, as well as people with disabilities or diseases, etc.

Then he will go to the Samanes Park, a 37 km journey, with a combined security operation among Armed Forces, National Police and the Transit Commission of Ecuador, that has already established the routes the papal procession will use in the city to formalize an outdoor mass.

There, the Pope board the popemobile. The vehicle was designed by the Ecuadorian company GM OBB, a Chevrolet assembly plant in the country. The car was presented Monday in Quito and will be at 12:00 today in a ceremony at the Military fort Huancavilca.

Then, he will go to the Javier High School, located in the Del Bombero avenue, to have lunch with the Jesuit community and his papal entourage, and meet his friend Father Paquito.

In Quito, he will meet with President Correa the night of July 6; the outdoor mass will be held in the Bicentenario Park at 10:30 of the next day, after which he will meet with civil society in Plaza de San Francisco; on July 8 he will visit the El Quinche shrine.