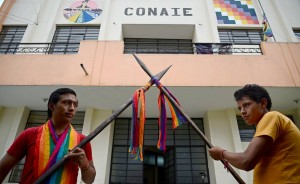 Before the lack of an agreement and unanimity, the block of Alianza PAIS (AP) meets today to discuss the transitional provision to the amendment to indefinite reelection proposed by President Rafael Correa to exempt himself and the Assembly members who already have served two consecutive terms from this benefit.

The possibility arose yesterday in the Assembly of including mayors, governors and other regional officials who are in the same conditions, athey will lso try to define the appointment today, before the vote on the report for the second debate in the Commission, scheduled for next week.

Several pro-government Assembly members still expect their leader to desist from the idea of not participating in the elections of 2017 and others point out that there are faces as the former vice president Lenin Moreno that could well win an election.
Source: http://www.eluniverso.com/noticias/2015/11/18/nota/5247066/bloque-oficialista-intenta-hoy-acuerdo-sobre-transitoria