Russia is expelled from the G8 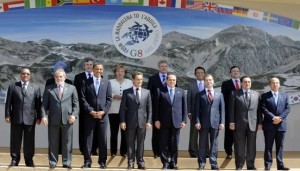 In The Hague, the G7 leaders (Germany, France, UK, Italy, Canada, USA and Japan) and the European Union met to address the crisis in Ukraine, an initiative of the U.S. President, Barack Obama.

That group of potencies has returned to the format of seven partners, instead of eight, having precisely excluded Russia in retaliation for its attitude in that litigation. In fact, it is Russia that performs the G8 presidency this year and should hold a summit of the group in Sochi, whose preparations have been canceled.

In this context, the British Prime Minister David Cameron has discarded this Monday that Russia is going to host this year any act of the G8.

Regarding this decision, the Foreign Minister of Russia, Sergey Lavrov, has downplayed those decisions and has said that “it is not a big deal” for Russia to stop being part of that club.