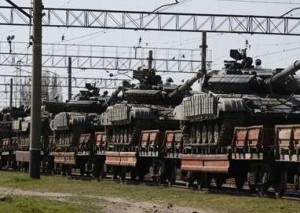 Russian President, Vladimir Putin, announced yesterday to German Chancellor Angela Merkel, that Russia undertook a partial withdrawal of troops from the border with Ukraine, which represents the first reduction of tension in the crisis between the two countries.

In a telephone conversation, Putin and Merkel spoke about “other possible measures to stabilize the situation in Ukraine,” said the German Chancellor.

According to the Kremlin, Putin pointed out to Merkel the need for a constitutional reform to guarantee the legitimate interests of the citizens in all regions of Ukraine by the adoption of a federal system.

For its part, Russian Deputy Foreign Minister, Grigory Karasin, said that his country will not recognize the legitimacy of the presidential election summoned in May 25 in Ukraine, if a constitutional reform proposed to convert such country in the federal state is not performed.