Russian troops have withdrawn from the border assures Kerry 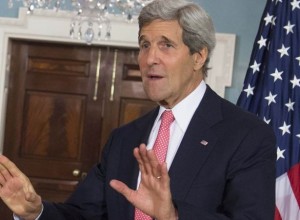 The U.S. Secretary of State, John Kerry, reported that Russian troops in the border with Ukraine are withdrawing.

“The troops at the border are moving back to Moscow, not to Kiev. And the fact is that I think everyone knows that the sanctions that President Barack Obama set against Russia have had a profound impact,” Kerry said in an interview with PBS chain.

Kerry also warned that there are still “warning signs” that the U.S. expects to change: “There is evidence that Chechen personnel trained in Russia is crossing the border to disrupt order and get involved in the fight,” he said.

“We hope to engage Russia more proactively in reducing the tension and take advantage of the elections in Ukraine to build a path where Ukraine becomes a bridge between East and West,” he added.

AP approved Code of Ethics for its movement