Safeguard measures affect the poorest segments of the population 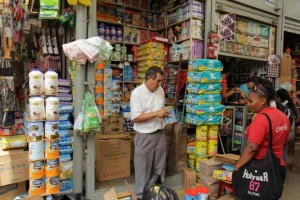 The tariff measures affect small informal traders, who must cope with the situation.

From March 11 and for 15 months exchange safeguard measures are into force, which levy customs tariffs of 5% to 45% on imported products from 2,961 subheadings, which include clothes, shoes, fruit, meat, in to order to to face the fall in oil prices and the currency devaluation of neighboring countries.

Small traders, especially informal, have been affected by these measures, mostly those who sell imported clothing and footwear. Chinese clothing is cheaper than the domestic, according to inhabitants of the cooperative Trinidad de Dios, in the Monte Sinai sector of the city of Guayaquil, who prefer to buy a Chinese t-shirt that costs $ 3, rather than a national, which costs $ 11.

Similarly, carriers of this marginal sector indicate that the cost of the tires of the motorcycles they use to carry passengers has risen by 45% due to the new tariffs, in addition to spare parts, which are also imported.