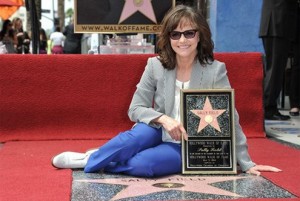 Sally Field, actress of Hollywood, received the 2524th star on the Walk of Fame in Los Angeles last monday. Before unveiling her star, the artist shared with the audience: `I started when I was 17. Fresh out of high school, I had no agent or belonged to the Screen Actors Guild.´

The actress, 67, famous for her role in the television series `The flying nun´ and the movie `Forrest Gump´, said that she comes from a family of actors, and showed her simplicity stating: `My life was never been full of Glamour, prestige or security forces. I never expected that my life would have been different.´

Oscar winner on two occasions, we can see her in her most recent role in `Spiderman 2´ as the aunt of the superhero.