Sandra Correa requests media is included in lawsuit against Oquendo 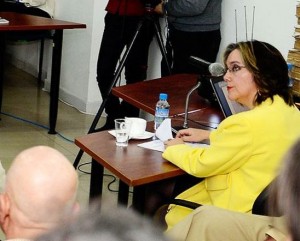 At the Superintendency of Communication (Supercom), was held yesterday the substantiation audience by the complaint of Sandra Correa, former Minister of Education in the government of Abdala Bucaram, against journalist Diego Oquendo by allegued media lynching during an interview last August, with two analysts.

During the hearing, the applicant requested the nullity of the Order because the Supercom did not include the daily Hoy and El Comercio. The argument was that the law is not retroactive. `They took off the character for denouncing (media lynching),´ said Sandra Correa yesterday.

`I sued three, not one, as media has published, exposing me to re-victimization. I ask an expert appraisal content analysis of newspapers to be established the arrangement, reiteration and purpose to discredit and diminish my credibility, ´ she added.

For their part, the defense of Oquendo, composed by Juan Pablo Albán and Daniela Salazar, requested to archive process, because after the request for revocation by Correa, the media lynching would not be met.