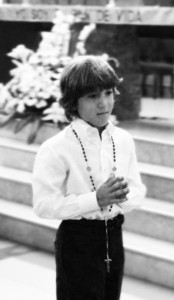 Hundreds of parents, relatives, and friends of the Aleman Humboldt School students attended the First Communion Mass, which began at 10.00 am.

During the Catholic ceremony boys dressed in white shirts and black trousers, while girls wore white dresses as a symbol of purity.   Santiago, who was in the front row between laughs and whispers with his friends, patiently waited to receive the Sacrament of the Holy Eucharist for the first time. His parents, Alvaro Noboa and Anabella Azín, were sitting on the next row. Robert F. Kennedy Jr., a family friend and Santiago’s godfather—who came from the U.S. to attend this important event in his godchild’s life—, was sitting next to the happy parents.

After peace greetings, the moment everyone was waiting finally came. One by one, students were divided in two columns—one for boys and one for girls—, after receiving the Body of Christ for the first time, each of them returned to their respective seats and performed their prayers. After the Mass was over, people began to leave the church.

“I’m very proud of you. You were always close to God, now you’ll be closer,” said Alvaro Noboa to his son outside the church.

To celebrate such wonderful occasion Alvaro Noboa invited close friends and relatives for lunch at his residence, located in Samborondón. Robert F. Kennedy Jr. gave Santiago a rosary as a First Communion gift.