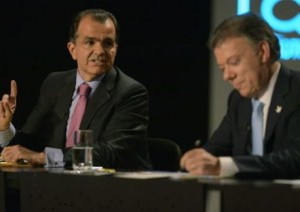 The exchange of accusations between candidates Juan Manuel Santos and Oscar Ivan Zuluaga prevailed in the election debate between the five candidates for the presidency of Colombia.

Besides Santos and Zuluaga, the meeting was attended by the Green Party candidate Enrique Peñalosa; Democratic Pole candidate (left) Clara Lopez and Marta Lucia Ramirez, of the Conservative Party.

Scandals of alleged money derived from drug trafficking and espionage in the peace process, were the main accusations during the debate.

For his part, Zuluaga said he would suspend the dialogues that are being carried out in Cuba if he is elected president and stressed that the recordings where he is accused of espionage is a montage and trap where there is impersonation of voices.

In response, Santos did not hesitate to label Zuluaga as a liar for having changed several times his version about the relationship he had with the hacker.