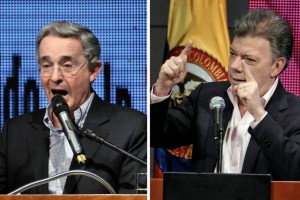 The tight dispute between the U party, which backs Juan Manuel Santos as its candidate for the presidential election, and the Democratic Center led by former President Alvaro Uribe, marked Colombian legislative elections on Sunday.

When it was thought that the former president would be the big winner, Santos party took up front when it only remained 5% of the vote to scrutinize.

With 98% of the votes counted, the party of Santos won 21 positions in the Senate and 36 in the Chamber. However, Uribe obtained 20 senators and 12 representatives to the Chamber, with which is projected as the greatest opposition force in the Colombian Congress.

The president also applauded the second place achieved by the now Senator Uribe and invited him to “put aside hatred and resentment and work for the country.”

The election day of this Sunday was one of the quietest in recent times, according to the Defense Minister Juan Carlos Pinzón, however, complaints of alleged electoral offenses persisted.