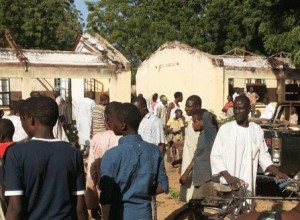 A school in northeastern Nigeria this Monday was victim of a suicide attack that killed 47 students and wounded 79, a fact attributed to the Islamist group Boko Haram.

Students of the Government Comprehensive Senior Science Secondary School, in the Yobe state, were waiting for the daily speech of the principal when the explosion occurred at 07:50 local time.

Several witnesses defined the explosion near the principal’s office as a “rumble” and indicated that in the place, shoes, school books, human remains and blood were scattered. This would be the second suicide bombing in the city in eight days.

“There was an explosion caused by a kamikaze. We have 47 dead and 79 wounded,” said the national police spokesman Emmanuel Ojukwu, adding that it was suspected that Boko Haram Islamists were the perpetrators of the attack.

The attack took place the next day the publication of a new video in which the leader of Boko Haram, Abubakar Shekau, again rejects the government’s request in favor of a truce and peace talks.