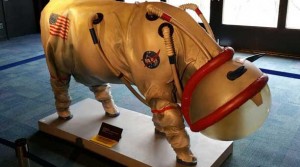 Jokes of all kinds are made by politicians and corporations every April Fools day. (Source: NASA).

April Fools Day or Day of Jokes is celebrated each April 1st in the United States. From mass media to politicians, even large corporations play pranks to the public. This celebration would be equivalent to the “Día de los Inocentes,” celebrated by the Latin world every December 28th.

It was the CERN (European Organization for Nuclear Research for its French acronym), the first to announce this morning the fundamental discovery of the universe structure that confirms the existence of “The Force,” something that grants powers to a particle physicist. “It’s an energy field created by all living things. It surrounds us; and penetrates us; it binds the galaxy together,” says theorist at the Ben Kenomi from the Mos Eisley University in Tatooine.

In the “Astronomy pic of the day,”the NASA showed a suit designed so that cows can live on the moon. The Lunar Grazing Module (LGM) was announced on the website of the institution, but this later clarified it was a joke.

The publication of “Nature” about the existence of dragons in ancient times and the possible return of this species due to climate change, joined the day of pranks. (E)