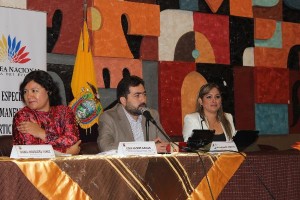 The organic Ombudsman’s draft law proposed by Ramiro Rivadeneira, current Ombudsman, was yesterday socialized in Guayaquil, in the Auditorium of the National Finance Corporation (CFN).

Rivadeneira described as necessary the law because current legislation dates from 1997, prior to the current Constitution, which provides new powers for the institution. He clarified that it is not a reform to the law of the consumer.

One of the points that caught the attention among the attendees was that refers to measures of enforcement, which was highlighted by Assemblyman Raúl Patiño, one of the speakers, the day of socialization.

Dora Aguirre, President of the Committee of Citizen Participation and Social Control, stressed that what is sought is that the Office of the Ombudsman has a law allowing citizens exercise their rights better.

The socialization of the measure lasted more than four hours. Today will repeat the same event in Quito.