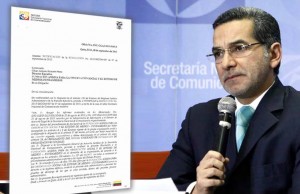 On 8 September 2015, the Communications Secretariat (Secom) notified Fundamedios of the decision to initiate the process of dissolving the organization because of its dissemination and promotion of the content of the independent blogs Estadodepropaganda.com and SentidoComunEcuador.com by journalists Roberto Aguilar and José Hernández, respectively.

Secom believes that “Fundamedios has disseminated messages, alerts and essays with indisputable political overtones that make clear the position of this social organization whose scope should limit itself to the areas of social communication and journalism”. Through Resolution No. 2015-SECOM-007 of 7 September, as well as initiating the process of dissolution, Secom gave the organization 10 days to exercise its right of defense and present evidence for and against the administrative process.

On 24 June 2015, Fundamedios had already issued an alert on Secom’s intentions when, through an official notice it pressed the organization “to comply with current legal regulations and the rules of its own statute” claiming that the dissemination of “alerts, messages and essays” was evidence “of clearly political positions that attempt against the social development that is stated as the main objective of this social organization”. By then Secom had already accused Fundamedios of having clearly deviated from its stated aims.

Secom became Fundamedios’ control and regulation entity on 16 January 2014. During a press conference held on 27 January of that same year, the organization had already informed that its administrative control was in the hands of its main aggressor.