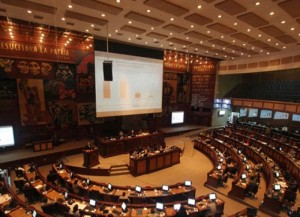 Yesterday (July 22), the National Assembly was the place for the second and final debate on the Monetary-Financial Code. The reading of the report was made by the Economic Commission Board .

One of its fundamental issues and of citizen interest in this project is the creation of the Deposit Guarantee Fund for deposits ofup to $ 32,000 for the private banking institutions, and $11,000 for entities of Popular and Solidary Economy.

The President of the Commission and Assemblyman Oswaldo Larriva explained the highlights of the report. First he talked about the importance of the economy not only in Ecuador, but rather in all countries. “It is key to development, in managing can be seen the orientation of a regime, banking sectors, insurance is a fundamental part,” he said.

He also indicated that the Monetary Code includes the protection of the rights of members of the Board for Regulation and Control, the promotion to special groups such as single mothers and migrants, and the creation of a Credit Support  System forpeople with disabilities and the youth. He ended his speech with the applause of his political peers.