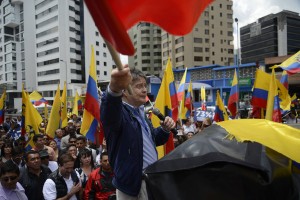 The former presidential candidate and leader of CREO, Guillermo Lasso, yesterday made a request to the National Electoral Council (CNE by its Spanish acronym) to prevent the indefinite reelection to be approved by the Assembly. In this case, the request was made by the collective Compromiso Ecuador.

Accompanied by dozens of people with Ecuadorian flags, Lasso led a march to the CNE, where he joined the Creo block assemblymembers, Councilor Eduardo del Pozo, the former Assemblyman César Montúfar and Auki Tituaña for an audience with the Board Secretary, Alex Guerra.

Lasso reported that during the early morning buses were not allowed to enter with people who were to accompany the event and read the question: Do you agree for the Constitution to be amended to allow indefinite reelection of the President and other dignitaries of popular choice? The answer, according to Lasso, will be a “resounding no.”

He handed the document and requested the form to collect signatures. In addition, the leader of CREO invited to “confront those who want to become from presidents to owners, feudal lords, masters of everything under the Ecuadorian heaven.”

He also called other parties to join the proposal. “I do not feel in the right to exclude any Ecuadorian, but we recognize that here we are together more than 40 political, social and trade organizations that want to face the 73% of Ecuadorians who want a consultation.”