A total of 47 parties and movements were removed from the electoral register by decision of the National Electoral Council (CNE), on October 31.

Only seven of them have challenged this decision. The leaders of these movements say that the decision of the CNE was taken for not participating in one of the last two electoral processes, and even in both. 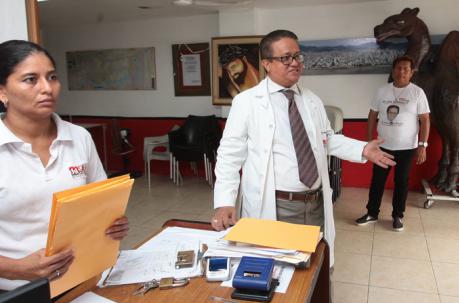 Luis Serrano, director of the Health and Labor movement, has a camel figure in the central office, in Guayaquil.

Their challenge is based on the fact that the decision should be applied if they had not participated in two similar elections, and not in a presidential election process and one of local governments, as happened to them.

If the measure is finalized, the parties and movements would be reduced from 278 to 231. The parties that challenge are: Adelante Ecuadorian Adelante (AEA), Health and Labor Movement (MST) and Emerging Movement of Transparency and Action (META), the last two from Guayas; Live and Movement Social Action and Solidarity, of Pichincha; Amazon Force Movement, by Morona Santiago, and the Renaissance Peninsular Movement, by Santa Elena.

The full CNE must know the challenges and resolve whether this argument is relevant, but there is still no date.

AEA participated in the 2017 general elections and the 2019 sectionals. The results did not favor it. This year did not achieve any prefecture, nor mayors.

Two years ago he did not present a presidential candidate and did not get seats for the Assembly. However, Álvaro Noboa resigned from the intention of seeking the Presidency with the aim of seeking unity in opposition to correism.

In the second round he announced that he would vote for Guillermo Lasso. Wilson Sánchez, director of AEA, believes that there is a legal vacuum because, in his opinion, to eliminate a national organization, the result of two consecutive similar elections must be taken as a source, that is to say two sectionals and not one sectional and one general.

“They are two different scenarios.” META, which was born in April 2014, seeks to remain on the electoral register with a challenge.

Although he did not participate in 2017 or 2019, he had a candidate for the Prefecture of Guayas, with Miguel Palacios, and the mayors in at least six cantons.

Its director, Alfonso Harb, challenged the decision covered by the resolution that returned legal life to Ruptura del 25, the movement of the Minister of Government, María Paula Romo, because it had been eliminated for having participated only in one of two elections.

He points out that there is currently no regulation or rule to eliminate a movement for not participating in an electoral process.

And the transitory CNE resolved “that no party can be eliminated by a rule that does not exist.”

In the 2017 presidential electoral process he supported Guillermo Lasso. And being a provincial movement saw unnecessary participation for assembly members, because “it was suicide to put candidates.”

He is currently doing tours with the Creo expresidencial for his third career. In 2014, MST was also born.

A year later, the opposition groups began to join the constitutional amendments of the Rafael Correa government.

Until in 2017 it was one of the local movements that Lasso added as support in the lid that Lenín Moreno won. For the 2019 elections, it barely reached 0.20% of the votes.

Its director, Luis Serrano, remembers that he participated in 15 cantons with mayors candidates: six in alliance with Creo; one with the Noboa party and 15 alone. “How can I not be indignant, if we spend three years collecting signatures and between roosters and midnight they resolve to eliminate us.”

He says he has more than 38,000 adherents who expect him to make a change in local politics. In Pichincha, one of the movements that seeks to stay is Vive, by former councilor Antonio Ricaurte.

This organization was registered in 2012. In the 2014 elections it made an alliance with SUMA, to support the postulation of Mauricio Rodas to the Mayor’s Office. Ricaurte, on the other hand, topped the lists of councilors in a district of the capital.

Mario Granda, councilman of Quito and president of the Vive Movement, described the resolution as irresponsible, as his organization has obtained more than 3% of the vote required to remain a local movement.

“Our analysis is that we have never taken a ‘yellow card’ and, worse, we are in a position to be eliminated.”