Severino Sharupi: ‘We are concerned about the militarization of the streets, beyond the reelection’ 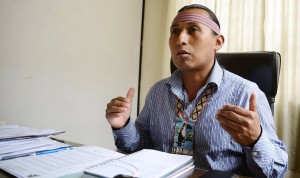 In an interview with El Universo, Severino Sharupi, leader of territories and natural resources of the Confederation of Indigenous Nationalities of Ecuador (CONAIE), announces his active participation this November 26 in the march against the constitutional amendments, in order to file the bill.

Sharupi indicated that each province will define their strategies “but these will have superior characteristics to what happened in August, as road closures and shortages of products.”

He said he is calling on citizens to support with their presence in the streets, “which is all we have left.”

“Beyond the indefinite re-election, what we really care about is the militarization of the streets, because one of the points of the amendments will allow it without the need for a state of emergency, our organizations have the mission to defend the territory and the natural resources.” he said on the amendments.