The calendar is titled “Vladimir Vladimirovich, we love you. Happy Birthday Mr. Putin”, the 12 journalism students that posed 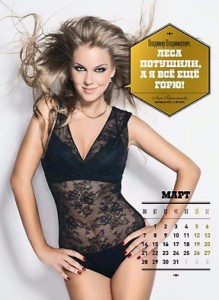 for the calendar also come with flirty phrases. On each page of the 2011 calendar, a picture can be seen of a girl on lingerie accompanied with spicy phrases directed to the Prime Minister. Phrases like “you’re the best”, “I love you”, “and you get better with the years”, others said “I want to congratulate you personally call me at 8-925-159-17-28,” Miss March, Lena Gornostaieva wearing black lingerie say, “You dominated the forest fires, but I’m still burning.”

Maxim Perline, a 22-year-old producer who works for a patriotic channel on Internet, Rusia.ru and the editor, Vladimir Tabak, designed the calendar. The young woman posed for free, Perline added to the AFP.

“Our objective was to show not just dumb models, but smart working girls, journalists who have their opinion and are capable of defending it.” Were the comments of Perline.

Lady GaGa Beats Ellen and The Queen on Forbes List