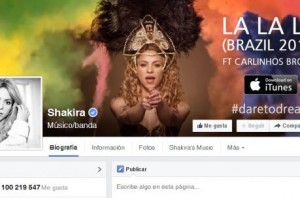 The Guinness World Records organization included the Colombian singer Shakira in the new edition of its book, for being the artist with most likes on Facebook.

The singer reached the title in July, after achieving 100 million followers on his official account.

Meanwhile, the singer Katy Perry will also be included in the list for being the celebrity with the most followers on Twitter. Perry totaled 56 million followers.

Another of the personalities who will be part of this group is Miley Cyrus, for being the most searched singer in internet.

This book will be released on 11th September.