Shakira is accused of plagiarism for her music video ‘La, la, la (Brazil 2014)’ 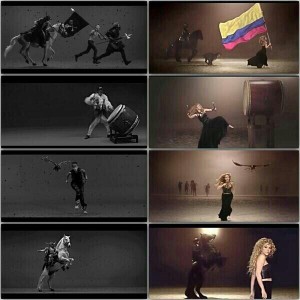 Shakira’s new music video, ‘La, la, la,’ featuring the Carioca musician Carlinhos Brown, and which counts with the presence of soccer stars such as Gerard Pique, Lionel Messi, Cesc Fabregas, Abidal Neymar, James Rodriguez, Aguero, Falcao and even Piqué Mebarak Milan, the son of the artist, has been accused of plagiarism.

A few moments after the release of the video, social networks were flooded with obvious comparisons in which similarities were found with the clip of the song ‘Iron’ by Yoann Lemoine aka Woodkid. “I just smile and I would be flattered if this really was a video of Shakira and not a commercial for a group like Danone (yogurt brand),” said the artist in his Twitter account.

Kim Kardashian and Kanye West got married at an Italian fortress