Shark travels 4,000 kilometers, returns to Galapagos and it is not known where it is

A veil covers mystery to the moment Cassiopeia, a female hammerhead common fulfilled a trip round trip of over 4,000 kilometers from the Ecuadorian archipelago of Galapagos to Central America, and whose whereabouts are unknown until July 12 from 2021. 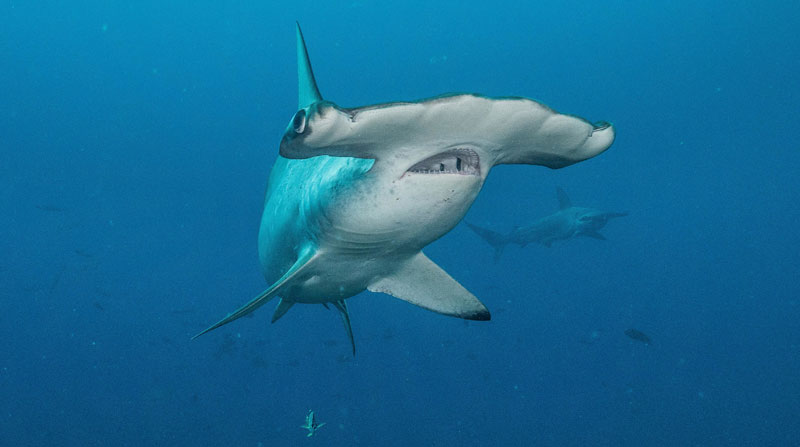 Scientists from the Galapagos National Park warned that a female shark that traveled 4,000 km returns to Galapagos and it is not known where it is.

It is about a pregnant female who was fitted with a satellite transmitter last February in the Galapagos Marine Reserve, and who reached the shores of the Gulf of Panama, a known birth zone for this species.

With his trip of just over two months, Cassiopeia allowed for the first satellite tracking, back and forth, a pregnant female, between the Galapagos and areas of birth on the coast of the Pacific of the Americas for these species in danger critic extinction.

Looking for a nursery area

Scientists such as Pelayo Salinas de León, from the Charles Darwin Foundation, presume that Cassiopeia left for the Central American coasts in search of a “nursery” area for her young, since on the continent there is greater availability of mangroves where the little ones find food and protection during the first years of his life.

Although in Galapagos there are favorable places to give birth, experts presume that Cassiopeia traveled to Central America because there are many more “nursery areas” on the continent and her arrival in Panama, between March and April, coincides with the time when babies appear in this species in shallow areas near the coast.

The species Sphyrna lewini, to which Cassiopeia belongs, has a gestation period of about 11 months and gives birth between 12 and 41 young at birth. The mother leaves after giving birth and the young must fend for themselves, so mangrove bays or other coastal environments provide them with food and security.

After the “express trip, round trip” from Galapagos, the female shark returned to the archipelago, leaving a load of fundamental information for experts to advance in the analysis of the behavior of these animals to ensure their conservation.

“They are species that do not know borders or barriers. This animal crossed the exclusive economic area of at least three countries: Ecuador, Costa Rica and Colombia” before reaching the coast, said Salinas, recalling that sharks also migrate through areas where there is no protection.

Cassiopeia – more than 2.5 meters and between 10 and 25 years old – has been key for the experts because “it has tested with real data the hypothesis that a part of the females leave Galapagos and go to the continent ” where there are “nursery” areas.

The common hammerhead shark – he said – is a species that is in “critical danger of extinction” and “until joint action is taken” to protect migratory routes by establishing biological corridors or implementing a regional fisheries management plan, the populations ” sadly they will continue to decline”. And hence the importance of the information collected thanks to the aforementioned “express trip”.

“Cassiopeia is a revelation and highlights the need to work together because it demonstrates the internationality of this species, ” he said, recalling that there are national and international fishing fleets in the area that catch sharks “directly or indirectly.”

In addition to overfishing and unregulated fishing as the greatest threat to the hammerhead shark, climate change and the destruction of habitats are added, he noted, detailing that in the last half century there has been “a loss of between 30 and 50% of the coverage of mangroves worldwide”.

Sharks in general are top predators in food chains, they are like the “doctors of the oceans” and control “that everything is in a balanced way” in ecosystems, where they are specialists in feeding on sick or old individuals, so their disappearance would produce a great imbalance.

Doctor in Marine Biology, with studies in New Zealand, the United Kingdom and Spain, Salinas de León regretted that they had lost contact with Cassiopeia when he returned to Galapagos but expressed his hope that the event responds only to the detachment of the tracking team due to natural causes and not because it was caught on a longline hook.

In other cases – he says – they know that some animal has been caught “because the mark mysteriously appears in someone’s house transmitting.”

“I want to think that Cassiopeia is still swimming, free and happy,” he concluded by noting that the last sign of her was about two months ago.

Organic production is promoted in the region with virtual workshops