Shipment of cocaine is found in Crucita 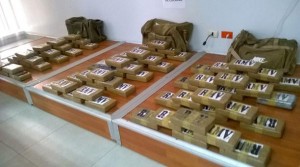 260 packages of cocaine, weighing 290 kilos and $ 4 million worth , were seized on the night of Monday on the site La Boca de la Crucita , in Portoviejo, confirmed Pablo Aguirre, commander of the zone 4 of the Police .

In this operation, called starboard, four people were arrested and two cars and a motorcycle were retained.

The drug came from Colombia and the destination was Guatemala.

Government will auction gifts for charity