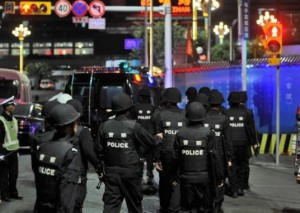 Armed men with knives injured six people in a train station in Guangzhou, the capital of the southern province of Guangdong, China, in the third attack that occurs in a railway station in 100 days.

As reported by the official news agency Xinhua, the attack occurred in the morning at the entrance of the main train station of the city. Five passengers were stabbed, while one of the attackers was wounded by a shot from the police that was patrolling the place.

The other three aggressors managed to escape, according to EFE.

The local newspaper South China Morning Post quoted several witnesses who claimed to have heard one of the attackers, who wore white suits hats, `shouting something´ before stabbing one of the victims in the head and neck. According to Xinhua, the wounds of the victims are not serious and are not in danger.

So far,  the identity of the attackers did not transcend and the police investigates the causes of the new attack.