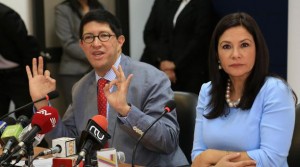 On Monday, craftsmen, micro, small and medium entrepreneurs expressed a number of concerns to the authorities of the front of production in relation to their production activity in the premises of the Chamber of the Small Industry of Pichincha (CAPEIPI).

The Coordinating Minister of Production, Nathalie Cely; the Minister of Foreign Trade, Diego Aulestia, and officials of the economic front were responsible for resolving all the doubts of participants.

Christian Cisneros, director of the CAPEIPI, presented nine sheets of paper that explain the problems faced by entrepreneurs to start a business and the proposals that could be implemented. He noted that because of the red tape and other state and municipal requirements two of six projects fail.