Social movements delivered an oil painting at the Pope Francis 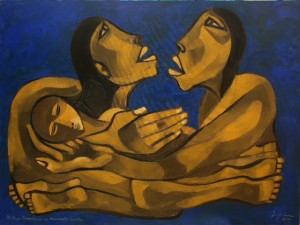 ‘Humanity’ is the name of oil on canvas (90 x 120 cm) that made the Ecuadorian painter Pavel Egüez and was delivered to Pope Francis, representatives of social movements.

‘Humanity’ is the name of the oil on canvas, representatives of social movements delivered to Pope Francis the occasion of the World Meeting of Popular Organizations, held from 27 to 29 of last month in Rome and the Vatican.

The work was done by the painter, illustrator and Ecuadorian muralist, Pavel Égüez, who in 1999 began a cycle of paintings called Cry of the Excluded, which tours Latin America, as an expression of symbolic support to the struggle of the social movements of the continent for intercultural and diversity.

In a symbolic act, at the closing ceremony, the Ecuadorian Osvaldo Leon, who participated for the Information and ALAI community cleanup of Social Movements, was commissioned to deliver the paint to the Ghanaian Cardinal Peter Turkson, president of the Pontifical Council for Justice and Peace of the Vatican, entity that led the performing of the meeting.