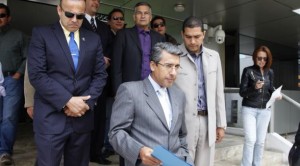 Representatives of the Sociedad Patriótica Party (PSP for its Spanish acronym) resorted yesterday to the Constitutional Court (CC) to submit two questions that seek to promote a referendum. This, after the plenary of the National Electoral Council (CNE) rejects the PSP request for referendum.

Gilmar Gutiérrez said that the electoral entity would be acting with double standards because for some processes they establish a procedure and in other cases they change the rules.

He assured they resort to the Court so that the intention of holding a referendum gains momentum.

The two questions are intended to amend the Constitution to avoid the use of public resources for campaign and for the election entity to include representatives of political organizations.