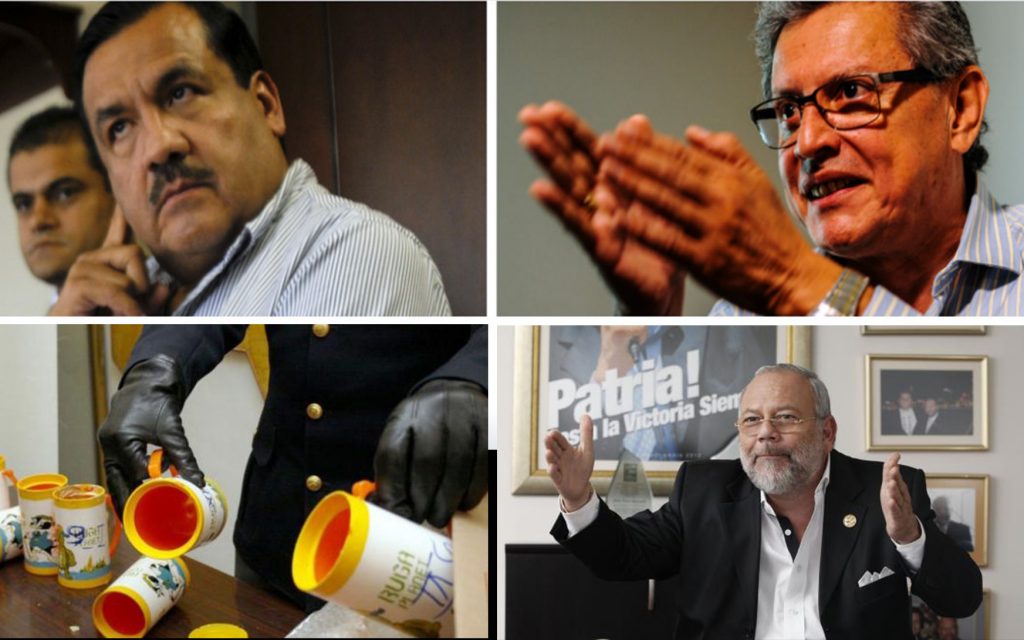 During these ten years of government of Rafael Correa, scandals have arisen for alleged irregularities in public procurement, illicit enrichment, embezzlement, corruption and related crimes.
One of the most notorious cases is that of Sports Minister Raul Carrion, who was sentenced on April 27 to five years in prison for the crime of embezzlement. Carrion was the head of this state office from December 19, 2006, until December 2, 2008, when he resigned. He was prosecuted for awarding contracts for the purchase of sports equipment, medical equipment the construction of a sports center.
After eight years he has been sentenced four times for embezzlement, in any case, his sentences exceed the five years nor do they are added. In addition, he has three other pending lawsuits.
Carrión is also known for the leakage of a video dated June 28, 2007, in which he asserted that President Rafael Correa obeyed his orders.

Problems also remain within the family …

A decision marked the distance between brothers Rafael and Fabricio. It was on July 21, 2009, when the Government announced the unilateral termination of all the contracts with the companies of Fabricio Correa. This controversy arose after the press denounced the so-called case ‘The Big Brother.’

To continue with the investigations, a Citizen Oversight Commission was created to track the contracts. In August 2009, the damage estimated by the commission was around $ 300 million; However, Pablo Chambers, who presided that body, mentioned – in January 2010 – that contracts investigated totaled nearly $ 1 billion, and “it is presumed that most of them had to do with Fabricio Correa.”

On the other hand, Pablo Chambers and Gerardo Portillo, former members of the commission, were sentenced to a year in prison for assuring that the president knew of the contracts. They were notified of the denial of the annulment appeal they filed at the end of 2016.
The purchase of vests and GPS equipment, under scrutiny
“I never said they were the best vests in the world, but they still had a guarantee,” was the answer of Ricardo Anton, who was director of the National Transit Agency until July 2011, to questions about the poor quality of the vests. This after being known the alleged irregularities in the bidding process conducted by transit agency for the purchase of motorcycle vests, in December 2010. The vests were purchased through two contracts that added nearly $ 10 million. The process was also followed by the complaint of embezzlement in the alleged irregular acquisition of about 70,000 GPS units for public buses.
A pouch full of surprises

In early 2012, the Italian Police found liquid drug in the pouch of the Foreign Ministry of Ecuador, which is used for shipping official documents of the diplomatic missions. But the Foreign Ministry authorized that the suitcase be used so that the organizers of the ‘Ruga la tortuga’ play send some of their implements to Milan. An attempt was made to camouflage the liquid drug. Hence the “narcopouch” case aroused.
The Duzac Case
This time it was the cousin of the president Pedro Delgado, who was involved in two scandals. The former Chairman of the Board of Directors of the Central Bank, and former representative of the Public Law Management and Enforcement Unit of the AGD-CFN Trust No More Impunity (Ugedep), first resigned after publicly recognizing the forgery of his university diplomas. Another scandal would emerge later: the granting of a $800,000 loan to Argentine citizen Gaston Duzac under irregular conditions. Delgado is a fugitive from justice and currently resides in the United States.
Petroecuador and Odebrecht, the tip of the iceberg
All this arises from a research published by the International Consortium of Investigative Journalists (ICIJ) in April 2016 on the so-called Panama Papers, which has given rise so far to 24 inquiries into alleged acts of corruption in the interior of the Petroecuador state oil company.