This Monday, April 11, several roads in the main banana provinces of the country: Guayas, Los Ríos and El Oro , were blocked by producers who left their farms to protest the current situation of the commercialization of the fruit due to the impact of the war between Russia and Ukraine. 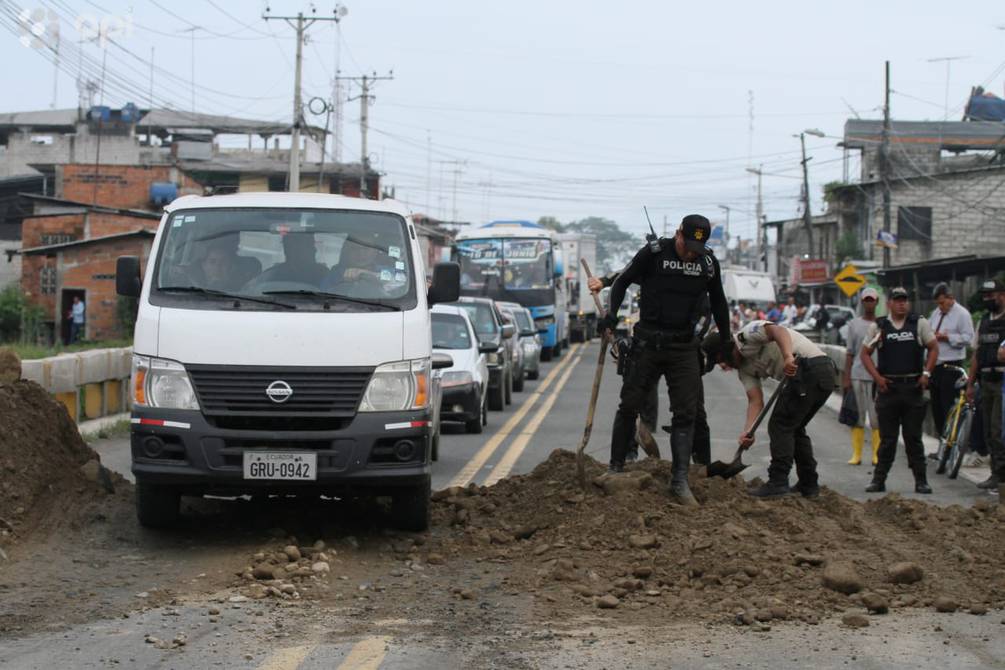 The police were in charge of clearing the road of the stone material that the banana producers placed to block traffic in protest at the crisis that the sector is going through due to the fruit that has stopped being exported to Russia and Ukraine.

With stone material and bunches of bananas, the farmers blocked roads such as the Puente de la Iberia and Río Bonito-El Guabo, as well as the Machala-El Guabo highway and the road to Puerto Inca, which caused great congestion. However, personnel from the National Police, with shovels, was in charge of restoring traffic by removing the material placed by the banana growers.

Segundo Solano, spokesman for the National Federation of Banana Producers of Ecuador (Fenabe) , maintained that the banana sector is going through the worst crisis, however he acknowledged that the Ministry of Agriculture and Livestock is also going through various problems such as the conflict between Russia and Ukraine.

“But that does not include all international markets and that is the problem that the Government must intervene immediately; Currently there are no public policies in favor of the production sector and everything that has to do with agriculture,” Solano claimed.

According to figures from the Association of Banana Exporters of Ecuador (AEBE) , until last April 6, Ecuador closed the first twelve weeks of banana exports to Russia with 14.01 million boxes sent to this destination. The conflict started in week 8.

During the same period of 2021, 17.01 million boxes were exported, which means a decrease for the sector of 17.64% in the level exported compared to the performance of the previous year.

While 2.41 million boxes were exported to Ukraine in the same period, but this year Ecuador stopped exporting to Ukraine from week 8 due to the closure of the ports in that country due to the conflict. The temporary cessation of operations with this country, according to AEBE, means for the sector a decrease of 49.36% in the level exported compared to the performance of the previous year, in absolute terms this corresponds to less than 1.19 million boxes

“At the end of week 12, Ecuador received a cumulative total (from week 1 to week 11) of $122.40 million FOB from the destination of Russia in the year 2022. Week 12 experienced a negative variation of 5.86% compared to the same week in 2021. In dollars, Ecuador stopped receiving around $5.62 million this week. The study period reported a reduction in FOB income of 17.84% compared to 2021″, explained the AEBE study, which reveals that in week 12 only 43 boxes were exported to Ukraine.

Of the 13.86 million boxes exported in the first twelve weeks of 2022, the port of Guayaquil has shipped 68% of them, maintaining the same share as the previous week. On the other hand, Puerto Bolívar, in El Oro, exported 32% of the boxes destined for Russia, this reflects a decrease in the participation of this port of at least 6 percentage points compared to 2021.

Buyers from 23 countries meet at the virtual fair Ecuador Food Fair, with the circular economy as the axis