South Africans remember Mandela at the anniversary of his death 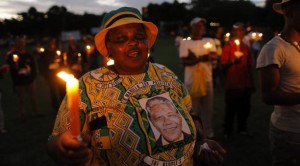 Today marks one year after the death of Nelson Mandela, former South African President and winner of the Nobel Peace Prize, who became an icon of the struggle against apartheid. On this day, the South Africans remember him with prayers, marches and even cricket.

“Our obligation to Madiba -the name of your clan- is to continue building the society he imagined, to follow his lead,” said South African Emeritus Archbishop ,Desmond Tutu,  on Thursday in a statement.

The official ceremonies scheduled for today include an interfaith Mass in Pretoria chaired by Vice- president Cyril Ramaphosa and an offering of flowers from the veterans of the struggle against the racist apartheid regime.

“Although Nelson Mandela is no longer physically with us, his legacy continues to guide us,” were the words of Frederik Willem de Klerk, his jailer and who later shared the Nobel with him for his role in ending the racist regime.

Today will sound across the country bells, horns and sirens for three minutes and seven seconds. Also, then there will be three minutes of silence in memory of Mandela and his legacy to the modern society.

During the weekend there will be poetry readings and concerts to remind the global icon against racism. There will also be marathons and South African cricket and rugby teams will play a friendly game of cricket called Nelson Mandela Legacy Cup.