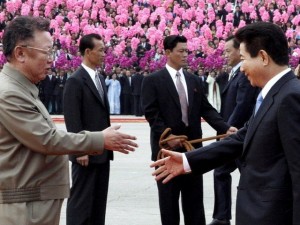 This Wednesday South Korea proposed a date to North Korea; this is the first official contact with its rival after the deadly shelling of a South Korean island. The meeting should be in two weeks to discuss high-level military talks. The North has recently expressed his desire for talks to ease hostility in the peninsula after a month of threatening war. The South responded to the North’s November 23 attack with military exercises and threats of its own. The possible peace talks remain wary of North Korean intentions. Meanwhile Seoul, Washington and Tokyo insisted that the North should give up his atomic ambitions.

On this Wednesday, U.S. Deputy Secretary of State James Steinberg had meetings with Foreign Minister Kim Sung-hwan to establish allies’ ties. Steinberg asked the North to demonstrate their rejection to hostile activities and agree to a dialogue regarding its nuclear programs.

North Korea’s Foreign Ministry answer came as a call for negotiations with Seoul and Washington to assure that there will not be any future encounters. The North’s artillery attack on South Korea’s Yeonpyeong Island caused the death of four people; at the same time it fueled the rivalry between the neighboring countries. The tensions increased because of the March sinking of a South Korean naval vessel Cheonan. Investigations blamed a North Korean torpedo that killed 46 sailors.