State of Calamity Has Been Declared in Brazil 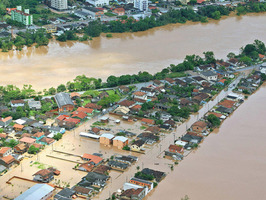 Due to the number of landslides caused by heavy rains in Brazil, the governor of Rio de Janeiro, Sergio Cabral, declared today the state of public emergency in the seven cities that were the most affected by the rains this week that left 611people dead in the southeastern of Brazil.

Hundreds of houses located in the foothills of the mountains, were destroyed and buried, the recent declaration will make easier the reconstruction of housing infrastructure of the homes that 6050 people have lost. 7780 people had to leave their houses (located in areas of risk) to temporarily shelters in gymnasiums and public schools.

In the state of public calamity, the government allows both the regional and municipal service to hire construction companies and workers, without open bidding and skipping other bureaucratic obstacles.

The decree, which will initially be valid for 180 days, also makes it faster the material purchase and execution of works.

As this is one of the greatest tragedies in the history of Brazil, Dilma Rousseff, president of the country, declared three days of national mourning for the number of people who perished because of the heavy rains.