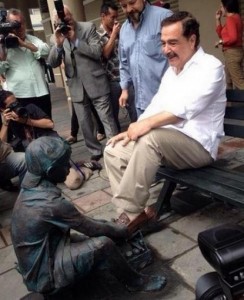 Monument “the shoe polisher” is one of the five statues installed along the Panama street.

Throughout the Panama Street (Pink Zone), in Guayaquil, in late October, five genre figures such as a shoe polisher child, the newsboy, the crabs seller, figures of Vicente Rocafuerte and Alberto Spencer; the first and second statue have unleashed a new controversy between the President and the Mayor of the city.

The Mayor has stated, that both the effigy of the shoe polisher boy as the newsboy are part of Guayaquil history and these are cases of improvement and effort. The aim of the sculptures is “rescuing the sector’s history, which was considered as one of the major cocoa areas in colonial times”.

The President, during the weekly address of November 1, from the province of Pichincha, especially expressed his rejection to the monument of the shoe polisher boy. “This is the symbol of one of the largest social exploitations we have as the child labor”. “Hopefully the young Ecuadorian rebel against this. This is not part of the folklore”.

Given these criticisms, the Mayor, during his radio address said, “Guayaquil overcame times when people walked barefoot, when workers dried cocoa in the Panama Street. This was achieved with hard work. There’s nothing wrong with remembering the story, because it does not offend or lie”.

Nebot said that rejection expressions of Correa, have no greater purpose than to raise a smokescreen to divert attention from more important issues such as the provision of the Constitutional Court (CC) so the National Assembly deal with the amendments promoted by the ruling party (indefinite reelection) and aspects of the transit competence transfer.