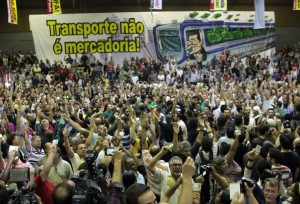 The strike that paralyzed the Sao Paulo Subway was suspended this Tuesday, however union leaders warned that if their demands for higher wages are not met, they will call on workers to cease work on Thursday, the day of the World Cup opening in Sao Paulo.

In a meeting held on Monday night union members voted to temporarily suspend the strike which started last week, but agreed that on Wednesday night they will vote again to decide whether to return to work or stop on Thursday.

Meanwhile, the union that represents workers in the Rio de Janeiro Subway said its members will vote on Tuesday night to decide whether they go strike.

A new shutdown would threaten the assistance of fans to the stadiums where the World Cup will be played because in both cities the subway is the main mean of transportation to get to these facilities.