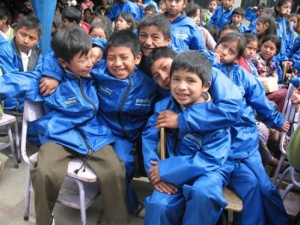 The Telephonic Foundation has given 4500 scholarships for children who work; this was made through a contest of Projects to abolish child workers. The project is managed by social and communitarian organizations that give assistance to children.

The projects that win the contest would receive $120 a month per children, and they will also be part of Red Proniño, allowing them technical, assistance with equipment and technology. Las Friday, the time frame for the presentation of proposals started and it will last until January 30 of 2011.

The requisites are available in the web site www.telefonica.com.ec/fundacion. The ministry of Education and the International Job Organization (OIT) will be in charge of selecting the winning projects. Elbia Games, an OIT representative in Ecuador confirmed that the country is progressing slowly on the abolishment of child workers, according to the census made by the Statistics and Census Institute in 2001, whose results showed that around 665 children and teenagers between 5 a 17 years are workers.

Sunday Match Ended with a Tie