Sucre is ‘insured’ in the public sector 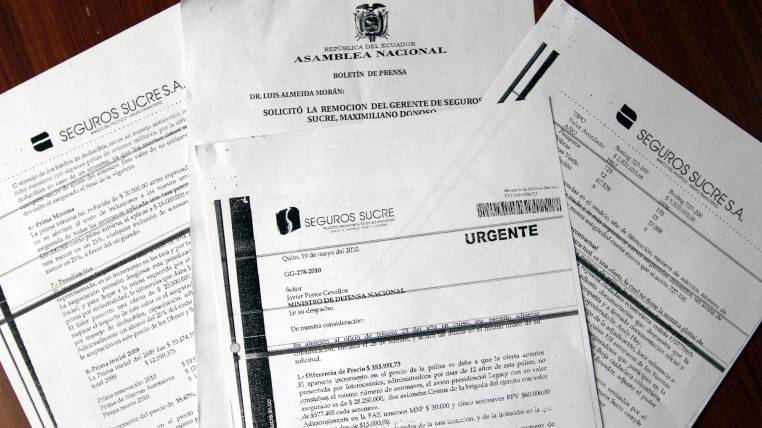 It is the company with the most successful public capital in the country. Seguros Sucre closed May as the number one insurer, with net premiums in excess of 105 million dollars. The second place, which occupies Seguros Equinoccial, added 75.5 million. They are 29.5 million dollars away.

The apogee of the state, which soared in the government of former president Rafael Correa, responds mostly to the control it has in the assurance of central government entities. Ministries, secretariats and public companies are obliged, by law, to contract with Seguros Sucre.

The private sector qualifies as unfair and inequitable the control of Sucre in the public sphere and for that reason they demand changes. The claim was heard in Carondelet and measures were taken that lasted two days.

On June 12, Eduardo Jurado, Secretary General of the Presidency, issued a statement addressed to the chairman of the Board of Directors of the Public Company Coordinating Company, Edisson Garzón. The text determined that public companies should hold open competitions to purchase insurance. The order was in effect until June 14. Then it was revoked.

Dayan Argüello, general manager of Sucre, told EXPRESO that the crossing of orders is insufficient because the hiring of the insurer is determined in article 107 of the General Regulation of the Organic Law of the National System of Public Procurement, issued by former President Correa. There it is ordered, under the system of special regime (without contests and directly), of insurers with more than 50% of public capital. Sucre is owned, in more than that percentage, by the National Financial Corporation (CFN).

That is, if you want to make contests to tender insurance for central government agencies, a legal reform is necessary and not just a letter from the secretary of President Lenin Moreno.

Edisson Garzón is also on the side of Seguros Sucre. For him, the premiums of public companies, which total about 100 million dollars, are only 6.25% of the total insurance market. Private companies still have ample space to increase their participation.

Garzón also explained that public companies of autonomous governments and entities outside the central government can contract with any insurer.

Even Petroamazonas made a contract through a contest. This month, one of the policies of the oil company (for the employees of the Company Committee) was renewed in a process in which private companies participated. Sucre was awarded the contract for $ 180,000, according to Álex Galárraga, general manager of Petroamazonas.

He told this newspaper that Sucre presented the best offer and that thanks to the contest a better price was obtained. Last year, without a contest, Seguros Sucre was awarded the policy for $ 250,000. Petroamazonas saved $ 70,000 for the open call.

Argüello indicated that, after President Moreno’s decree of austerity, prices for public entities were reduced. He also stressed that the conditions are set by the contractor and Sucre is adapted to the needs of the client.

Petroamazonas,  expects a better price for insurance that must be renewed in July, August and September. Galárraga said that, annually, the oil company allocates some 12 million dollars just for insurance. A figure that could decrease if there are contests with more than one proposal. (I)