SUMA asks the CNE to provide them the party promotion fund 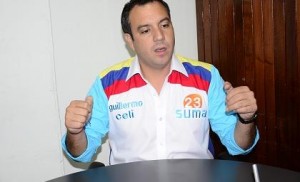 The political movement SUMA filed yesterday a protective action after the National Electoral Council (CNE) refused to provide them the party promotion fund.

Guillermo Celi, President in charge of the Movement, said that despite they meet the requirements of the Code of Democracy, the granting of this fund has been refused.

The Code states in Section 357 that the CNE “shall record in the Permanent Supporter Fund for the year in which the second election is performed, the amount allocated for political movements which have obtained 5% of the valid votes nationwide, the same that will have one year to complete the requirements of the law for political parties.”

“The CNE has denied such participation to SUMA despite having 19 mayors, three governors, more than 90 councilors and about 250 members of parish councils, which represent 26% of Ecuadorians, who are being served by our local governments. This funding has been given to us by the Ecuadorian people at the polls,” said Celi.

Ecuador will have a broadband like the developed countries