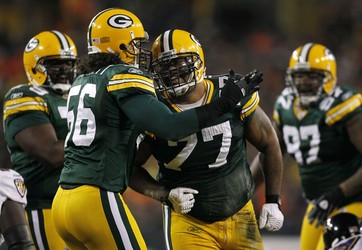 Yesterday the Green Bay Packers defeated the Pittsburg Steelers by 31-25 at the 2011 Super Bowl. Aaron Rodgers, Packers’ quarterback , made three touchdown passes and Nick Collins scored after getting the ball, which made the Packers’ fans scream all over the Dallas Cowboys Stadium. This major victory puts the green and gold football team in NFL’s highest place and becomes the fourth Super Bowl they have won in history.

The first Super Bowl at the Dallas Cowboys Stadium became filled with 103.219 football fans. Famous personalities were among the crowd, such as ex-president George W. Bush and baseball player Alex Rodriguez with his girlfriend, actress Cameron Diaz.

Singer Christina Aguilera, who recently starred in Burlesque movie with Cher, was chosen to iniciate the “Big Game” by singing the national anthem, something any singer would die to do. Such honor made Aguilera nervous and it became obvious when she accidently changed the lyrics of the song. At about 51 seconds in, as she was about to sing the fourth line (“O’er the ramparts we watched, were so gallantly streaming”), she accidentally sang a hybrid of the second line: “What so proudly we watched, at the twilight’s last streaming”.

Despite everyone, including Christina, realized the line was wrong; Aguilera kept singing and her strong voice echoed throughout the whole stadium.

The Packers were leading in the first half, Rodgers had scored two touchdowns and it was time for the halftime show. The Black Eyes Peas performed on a stage surrounded by a crowd of dancers right in the middle of the field, Will I Am began singing I Got a Feeling, making all the audience stand up, Boom, Boom, Pow followed and filled the 1.200 million structure with energy. People were singing and dancing on their seats when suddenly, Slash appeared on the stage and started playing Sweet Child of Mine on his guitar, while Fergie joined him with her amazing vocals. Right after, the sound of Pump it made the crowd jump, followed by Let’s Get It Started, and just when people thought things could not get better, Will I Am started singing Oh My God and Usher came down to the stage dressed in white and began performing. Where is the love, turned the dancer crowd red, and a mash-up of Time of my life and I got a feeling sealed the deal, putting an end to the half time show, sponsored by Bridgestone.

Jorge Saade: “We Must Turn Museums Into Icons of The City”

Ecuadorians in Spain will Have Access to Social Security Benefits